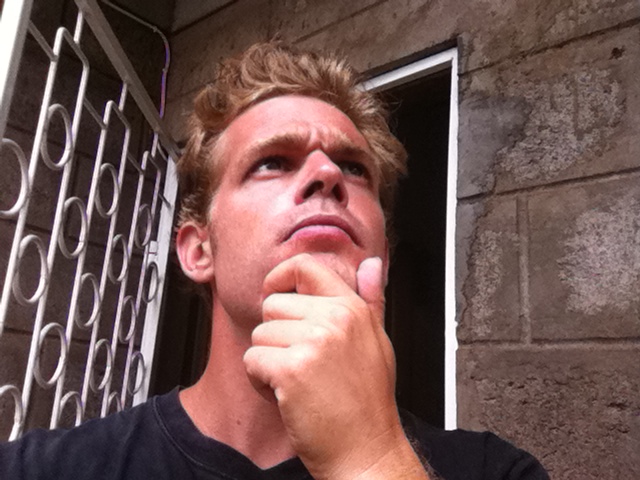 So yeah, the results came in and I was positive for malaria. My score was a 5.5 bacteria count, whatever that means. I was given coartem to treat the malaria. So you know, I got malaria here in Africa while taking doxycycline, a popular anti-malaria drug, what a joke. If you haven’t read yesterday’s update, suggest you do so now. Kinda makes you ponder things, yes?

Photo above was taken after the results came in, do I look sick to you?

I had no symptoms except an exceptionally sore throat and stomach cramps. Neither are promoted as the “common signs of malaria”. Had that German lady we’ll call “Larissa” never mentioned it to me on Facebook, never would have went. On that note, according to locals and people who live here, only people who die are foreigners who don’ recognize it or think they can’t have it as they are on the pills. If caught early it’s no big deal. Most who die are the insanely poor in rural areas who lack access and/or funds to treatment. Of those who die, it is predominantly young children.

Kinda choked I took an antibiotic and polluted my system for 90 days for NOTHING. It also cost me $130, I could of bought a small house and plot of land outside Pangani(for real). The Doctor in Thailand said don’t bother and the Doctor’s here said the same. The argument is cerebral really sucks which is more common in the west of Africa then here. Cerebral is bad but both are if untreated. A friend got cerebral, lost half his eye sight amongst other things… That said, he didn’t get it treated fast enough and was on the pills, hmmm do I see a pattern?

I asked why local people don’t get sick more often / die. He said that he sees lots of European / North American aka “Rich World” people come here. We have the immune system comparable to an African child. Also noted that adults around here have the immune system of a horse. We’re so sheltered back home that we never build natural immunity / resistance to ANYTHING except antibiotics… OH THE IRONY! Also pharmaceutical companies are a large part of the “Developed World”. Call my a cynic but I don’t overly believe in coincidence, dependence translates into dollars.

How many people do you know that are on daily medications for something?

The only people who said I need to take anti-malaria are the travel clinics back home. Granted, talk to someone who caught cerebral and I’m sure they’d tell you a different story. I’d say that anti-malaria pills are like an umbrella in a hurricane. You’re still going to get soaked, just not everyone gets a rogue piece of flying debris dead smack in the dentures, so to speak.

Honestly, as my Scottish friend (who got malaria with his wife while on doxy) says “I’ve had hang overs worse”. He never would have gone except his wife had a bad stomach for 5 days and a local lady said to get tested, they were both shocked when they got it. Besides being slightly chilled and a bit fatigued, I feel fine. To be honest, I often feel fatigued as I often stay out late, travel long hours and burn the candle at both ends so to speak.

I’m in my “Home in Africa” aka my friends. The housekeeper who was equally as glad as I to hang out again is making me broccoli and spinach soup with a watermelon avocado shake, slight speed bump on the commute to wherever it is that I’m going…

Have you had malaria? I’d say Swine Flu was worse. (So far)

46 thoughts on “Got Malaria on Anti-Malaria Drugs”