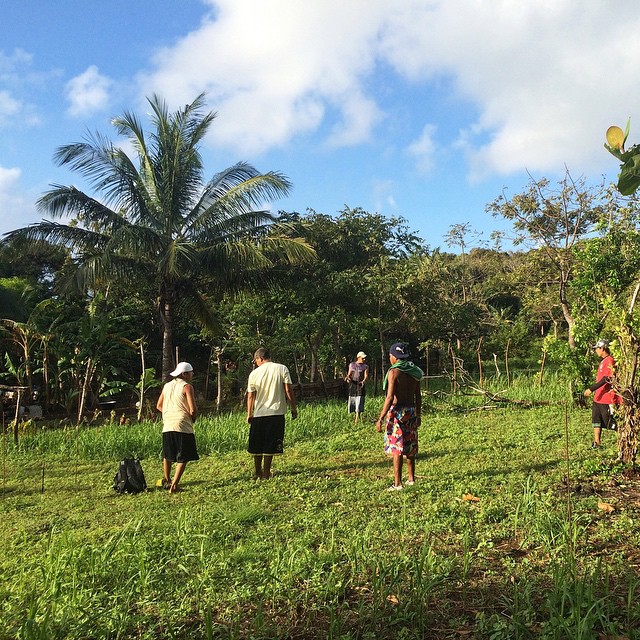 This post should really be called building my home in the Caribbean as this isn’t just some house but my home… It’s been over five years since I’ve had a place to call home and I’m thrilled to be building one and planting roots. When that first 6″ block of concrete was firmly placed on the soil, a feeling of growing roots took over me and it was undescribable really… I’m building a house on Little Corn Island off the coast of Nicaragua in the Caribbean Sea.

The plot isn’t big by any means when it comes to acreage but when it comes to a place to live, it’s a yard I’ll still have to get pumped up to go clean and larger than most lots I’ve seen in your average city. Building a house / home on Little Corn Island isn’t just some walk in the park either, as some local gent told me “it’s rugged”. All the materials come in by freight boat and are dumped on the dock.

You need to organize your own transportation for materials to the job site and remember, there are no motorized vehicles on the island. The freight boat often comes later in the day and when you’re living on the hill with a big order of building materials, don’t be surprised if you’re sitting around until long after dark waiting for everything to come. I see some people just letting things happen but if you want to make sure all your supplies arrive, you best be sitting there to count them as they come.

It’s a big deal keeping track of materials because there are no hardware stores. If you run out of sand or anything else, you’re waiting until next Saturday to receive them and nothing happens until the Monday when the workers come back. This is very different than anything I’ve ever done and I feel as though I’m not only planting roots in my favourite of all places but I’m also getting my PHD in International Living.

You see my friends, traveling the the world is one thing and a cool thing as well. That said, living around the world is a totally different league altogether and it’s part of my bigger dream. I also feel like I’m back in University sometimes and I’m in exams. Everyone else here for the most part is on vacation or whatnot so I’m doing as good a job as possible to lay low most of the time. I’m not used to going to work at 7am anymore…

Things are going well and soon I’ll be updating this with more photos. For now, I just wanted to write this so you know I’m not dead and why I’ve been a bit absent. When I got back from NYC, about a day later I caught the plague! Not really the plague but it felt like it and I”m a busy man but it floored me for a solid week. I was going to give it a few more days to get back to at least 85% when I found out I NEEDED to be back on the island.

I rolled the dice and signed up for standby on La Costena… Sure enough I got on the flight and a few days later when I would have been arriving, I couldn’t believe how much work had already been done. The old saying a difference a day makes really makes more sense now if that makes sense?! Alright, I’d continue but I’m meeting a friend for some sunset beers; we’ve met in Canada before and now he’s here a few days. WHO WOULD I BE not to show this distinguished gent some Caribbean hospitality?

This weekend I’m flying to Managua to do a massive shop; should be interesting. So it’s been a bit slow around here but my Youtube Channel is still moving so if you haven’t visited it yet, I invite you now. It’s already up to nearly 200,000 minutes of SHABL being watched on a monthly basis and growing. I’ll also be showing the entire build as I’m still vlogging daily, just trying to find the time to actually edit / do everything else in my life / have a life… On the topic of life, my dream definitely came true and I truly did stop having a boring life.

P.S: This photo is from the first day when I met the crew and they measured out the plot…

7 thoughts on “Building a House in the Caribbean”