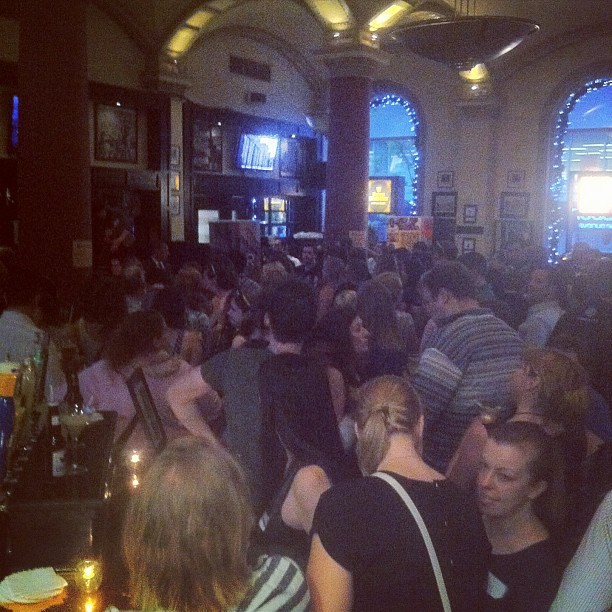 I’m writing this from a friend’s apartment on a balcony overlooking a busy street named after a King. The area is  alive and teeming with ambitious and curious looking creatures aka it’s my scene. I just love coming to Toronto because it’s a city where you can feel the people here want to be here. It’s not one of those cities that just has the vibe of people are here because they grew up around the corner. It’s also a city that makes you thank your lucky stars you’re still single as let me tell you, plenty of pretty fish frolicking in these warm waters.

Last night I attended my first Toronto Travel Massive and it was a solid time. I didn’t know what to expect as I’m usually on the road and totally oblivious to anything and everything happening in the industry. Basically it’s a gathering where like minded individuals that are passionate about travel come to mix and mingle and drink pints until their noses go red and tingle, my kinda place. Not sure how many people were there but it was a full house at The Irish Embassy Pub and if there is ever an event like this going on in your neighborhood, I highly recommend you look into it.

Afterwards myself and a small splinter cell made our way down King Street West on what felt like an urban hike / adventure all wrapped into one. We saw all sorts of curious creatures including a tranny big enough to bench press myself and all my belongings dressing up a piece of street meat in stilettos, welcome to the big city! We kept moving until we reached our destination which was some bar, later we were joined by other adventurous souls and drank until it got old.

Today I’ve been cruising around the city on what can only be described as a delightful day. The sun is shining and it’s not too hot or too cold, people are walking  around with smiles and attractive women are dressing bold, what’s not to like? Besides that I also went to visit my friend we’ll call “The Dentist”. Last time I was in town she told me to promise that I’d never let anyone else ever drill my mouth again after the whole “Costa Rican Dental Catastrophe”.

After visiting this clinic and having my mouth drilled this morning I’ve come to a conclusion about dental tourism. When it comes to getting your teeth cleaned, do it anywhere in the world that not only looks but is clean. If you get them cleaned often you’ll probably avoid all the major work anyways so it’s just a good practice. In the event that  you need some serious work aka drilling and the like, shop around and try and find the best dentist you can as it’s serious stuff;  you don’t need some dentist running a joke running a muck in your mouth, yes?

Now it’s time to kick back and relax aka wander around sipping spring water and snapping shots..

Later this evening there is the TBEX opening party and guess what? I’m looking forward to it.

P.S: HUGE THANKS to “The Dentist”.