Getting a Taste of Pakistan in Hounslow, London 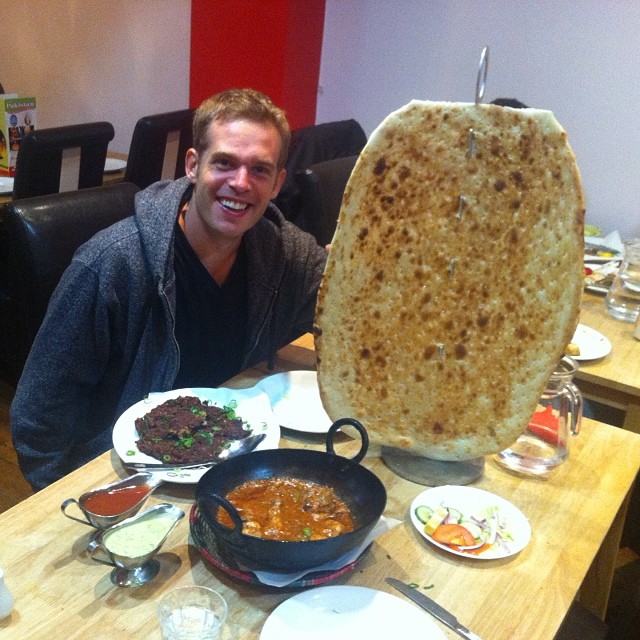 I’m writing this while eating left overs from the massive meal myself and friend “The Goat” devoured in West London last night. I’ve heard that the UK is a great spot for curries and again, I was not let down. We walked for what felt like hours because well, it was until we hit up this spot called “Taste of Pakistan” which is in West London in the borough of Hounslow. All I can say is that I’m delightfully distressed, disgusted at myself and have this real deep burning desire to visit Pakistan.

Taste of Pakistan in Hounslow Review

So we rolled in on a Monday night and the place was actually quite packed. I saw these gents eating this massive naan bread and was like huh? I looked at my friend and was like is this for real? I went to the restroom quickly after the hour or so walk and a few pints along the way. I came back and “The Goat” said are you hungry? I said “yes.” He said “Do you like spicy?” to which I quipped “Absolutely” and not much later the first dish arrived.

Alright, I’m not much of a food blogger as in I don’t really pay attention to what things are called or the ingredients in them but I do know a good taste. They came out with this spicy flat kebab of sorts and it was enough food to fuel a family. We hit that up for a while and I had no clue what else was coming. Basically we eat this kebab until we both felt sick and then the spiciest chicken curry came out along with the largest piece of bread I’ve ever seen in my life.

Verdict: Taste of Pakistan is delicious and filling

All humanly feelings of no longer being hungry faded to black as my eyes feasted on what was in front of me. We dug in with great vigor and zeal while casually looking at each other like “omg I’m so full” until it was time to stop. A few more tares of said bread and that was it. We took the rest to go and it’s just as good this morning, I dare say. About half way through the owner came by to see if we were enjoying it. I told him it was disgusting and I was highly disgruntled to which he knew was a joke.

Out and about in Hounslow, London

Later we rolled onto a bus and stopped in some pub that oddly enough was playing techno music and showing tennis on the television; could it be I found a new favorite spot? If they were showing golf on another screen and a few of the filler dudes were traded for ladies, it very well could have been. Suffice to say I woke up this morning with an extended stomach which quickly moved to my face and took the form of a smile.

Lots to do today and rolling into the core of the city later to hang out with a few friends who code on computers for a living and other interesting cats I’ve met both online and offline on my tours around the world and the internet at large, indeed. If you’re in the area I highly recommend you hit this joint up. It was one of the few meals in recent memory excluding hawker centers where I’ve dropped cash and been like “this was worth every penny and would have gladly paid double”.

Closing thoughts on Taste of Pakistan and Hounslow

The Pakistani restaurant Taste of Pakistan is a solid place. The prices are right, the staff is friendly and the food is delicious. Hounslow is also an interesting place. West London as a whole doesn’t get much attention but you’ll find some incredible food there.

Sure it’s not as glamorous as other parts of London. If a solid curry, massive naan bread, friendly people and an adventure sound good, go for it. Since my friend lives in Hounslow I feel that this won’t be the last time I stop I for a Tate of Pakistan when in London.

4 thoughts on “Getting a Taste of Pakistan in Hounslow, London”