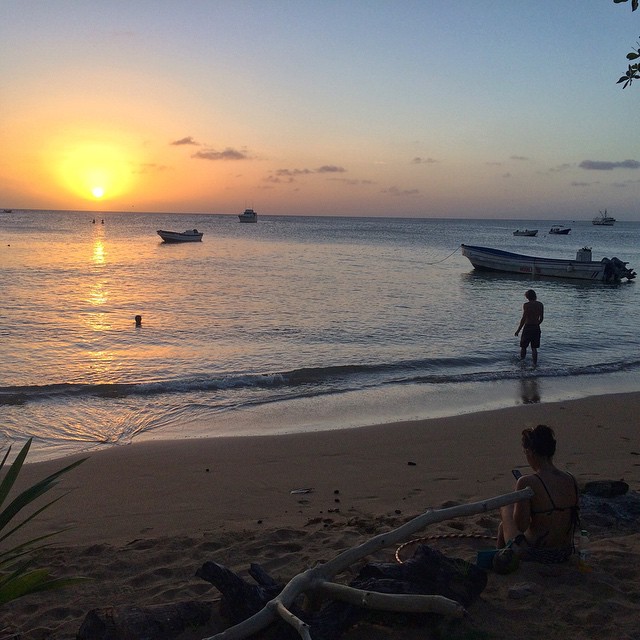 I’m writing this from my office on Big Corn Island and I’d like to take a moment to talk about the similarities and differences between the Corn Islands. It seems like many people who come are in the either or mode and that’s a shame. The majority of people I know who go to Little Corn have no desire to come to Big Corn and much to my surprise, lots of people I’m meeting this year on Big Corn Island have no desire to go to Little Corn Island. Both groups of people have different arguments and reasons as to why the other isn’t worth it but they’re wrong, all wrong!

So you know, my office is a reasonably priced hotel room which I found last year. I was buying these breakfasts at the Fisherman’s Cove or Cave or something of that nature to use the internet when someone tipped me off about a spot which wasn’t much more for a room. It started off  as my office and I’d commute to and from Little Corn but I’m a workaholic you see so now I just sleep in my office and I’ve never been happier! Alright, moving along…

Little Corn Island is where I live and I love the place but lots of people here on Big Corn this year are basically saying it’s too touristy, expensive and not worth the horrific panga ride. In all fairness, the seas are high right now and people coming and going are in for real treats. That said, in the past I’d maybe run into one couple that would just stay on Big Corn, now it’s a bit of a trend I’m noticing. Also, Big Corn Island is getting a lot busier from what I’ve seen; nothing like Little Corn but it’s noticeable.

Big Corn Island is a place where many people who frequent Little Corn Island merely arrive at by boat or plane before waiting for the panga to Little Corn Island. It’s also basically an island ATM to many as in you come to this island to use the ATM and then leave. I think that’s a shame because it’s like they are two different brothers from the same mother who have more in common than not. The food, people for the most part and beautiful beaches are all very similar just one is more grown up, the other not so much. Also, one loves cars and fast internet connections, the other one bonfires on the beach.

Big Corn is obviously the big brother and the “big city” if you want to call it that. The vibe is decidedly different and yes, you’ll hear the sound of cars, horns and all that jazz. It also has power 24 hours a day, decent internet and prices on day to day goods can be a solid 33% lower or more. Great example is a 1.5L bottle of water on Little Corn that will set you back 35C or ~$1.45 while the same bottle here depending on where you go will cost you 20C or ~$80. Besides that, there are more restaurants to choose from although most sell similar dishes. Many places on Little Corn will sell you a beer for 40C or ~$1.60 while the same beer will cost ~20C or $0.80 here.

Little Corn Island is the smaller brother but it also feels like you’re more removed from the world which is part of its charm. That panga ride isn’t just a ride, it’s like a barrier of sorts which brings you to an enchanted place where the rest of the world feels like a different universe of sorts. Once you get off that panga, there is just a a feeling which can best be described as relaxing. There are no cars, the pace is even slower than Big Corn which is already quite slow and it feels as though whether you show up in the morning, afternoon, tomorrow or next week, it will be the same thing going on and it’s always easy. Little Corn is considered more expensive and it is on day to day goods but accommodation wise it has similar options.

Also worth nothing is that the concentration of tourists is much higher on Little Corn not only because it has a smaller population but also because more tourists go there. I mention this because if you enjoy going out in the evening for some socializing and refreshments you’ll probably prefer the scene on Little Corn Island as there is one strip where most of the action happens, lots of locals and tourists out and about to mingle with and just a decidedly different vibe. I consider Little Corn a place that is fun in the day or night where as Big Corn for me is more of a place to be enjoyed during the day and take it easy in the evening if that makes sense.

Have I told you lately that I just LOVE living in the Caribbean?

It’s early morning and time for this gent to get some breakfast.

P.S: My head is spinning at the number of times I wrote Big & Little Corn Island.

P.P.S: This is the panga ride on a beautiful day…

6 thoughts on “Little Corn or Big Corn Island? Both!”