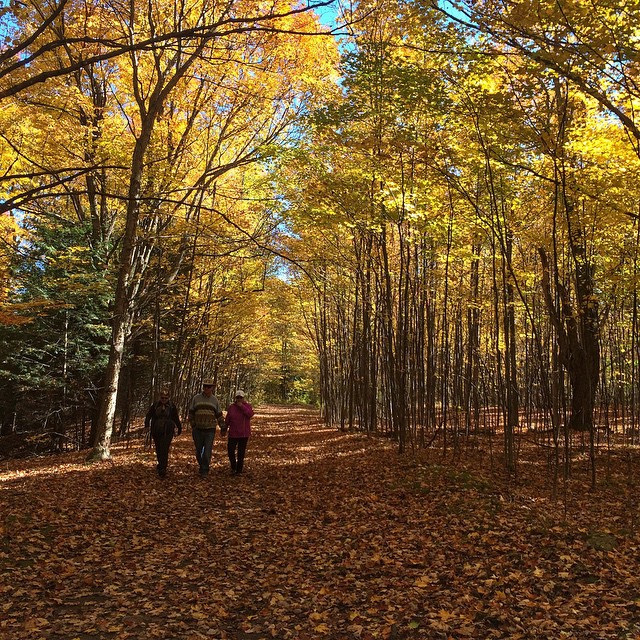 The photo above is from a stroll I took with my father this morning on the outskirts of Ottawa, a beautiful city it is. The only problem is the climate, really. It’s been mostly miserable weather since I arrived and hanging out in 8 degree temperatures in early to mid-October has me confused. Was it always this cold? What happened with Halloween years gone by and is global warming a myth? Everything seems colder and bigger.

I landed in Toronto and made an impromptu road trip with a friend here to Ottawa. The fall foliage was fantastic but boy, did it ever go on and on and on. It was like the same scene in a play that just never ended. Hundreds of kilometers across the great Canadian Shield (or so I think) which all basically looked the same. Finally, you’ll make it to the 416 which has to be one of the most dull highways known to mankind but enough of that!

Thanksgiving is without a doubt my favorite holiday of the year and that’s why I came home to celebrate it with my family and catch up with a few friends in the process. You see, Thanksgiving has everything one needs for a great holiday and the weather sure beats that of Xmas around these parts, yes? Normally unless my memory has failed me, early October is quite nice so you can come catch up with friends while still being able to enjoy the great outdoors without dressing for Armageddon.

Thanksgiving has no religious undertones so everyone can enjoy it and who doesn’t have something to be thankful for? Other than that, Turkey is an amazing treat and when you mix some good company, all the trimmings and a bottle of wine, you have a blockbuster of a holiday in my eyes. It’s been good being home but much like all the other times, it’s a reminder of why I’ve moved on.

It’s an odd feeling coming home to what feels like your hometown. It’s an even odder feeling when you don’t really have a home elsewhere. I guess Little Corn Island has become my home and I’m thrilled about it but still, I spend less than 1/4 of the year there so it’s not quite the same if you know what I’m saying… That said, the Azores have really caught my attention but so have parts of Italy and the rest of the world. Seems like the more I travel the more I want to see, funny how that works.

Thanksgiving was delicious as it always has been and most likely always will be. It was great catching up with loved ones and having a week dedicated more or less to R&R which means rest and relaxation for those of you not up to snuff with your acronyms. I think it’s important to come home for at least one holiday per year; if not one’s endeavors could be borderline selfish pursuits.

Stay tuned for an announcement post for my next big trip. I’m going back to a country I had a wonderful time in a few years ago to revisit some sites and try some new things. I’m excited for what the future holds but the present is alright too. It’s still Thanksgiving and I plan on making the most of it, enjoy every moment similar to how I plan to devour every morsel of turkey which comes in eyesight.

Oh yeah, check what came in the mail the other day while I was freezing on a patio with a friend of mine. It’s from Canada Post and if you read it from top to bottom it says “too early to think about snow?” Following that it’s a coupon to save on satellite television as soon that’s all most will be doing and finally, the real “nail in the coffin” a message from your friendly neighborhood funeral home?! That’s gotta be the most uplifting mail package I’ve seen in ages… 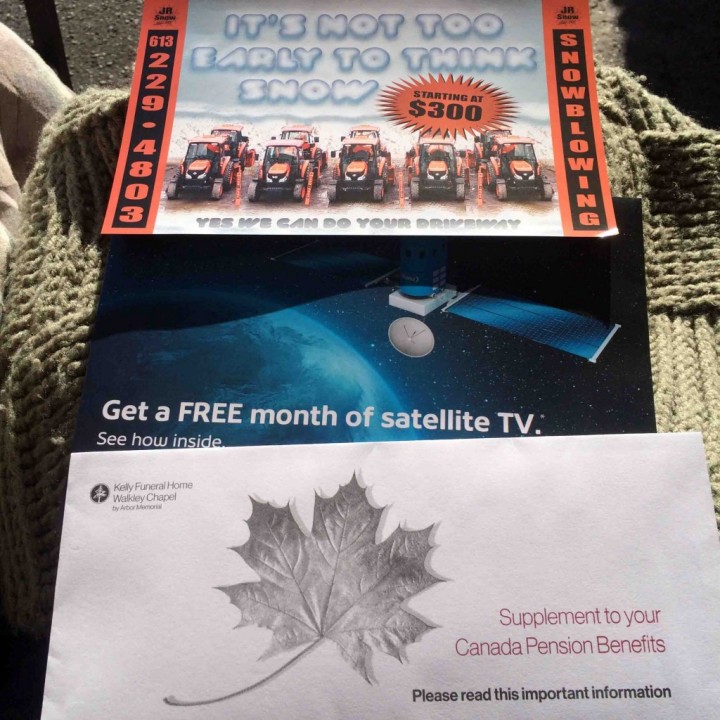 P.S: Time away from family is without a doubt the biggest con to this lifestyle. There aren’t many cons in my mind but the ones that are present are massive. It’s no surprise this style of living isn’t more popular…

2 thoughts on “Home for Thanksgiving in Ottawa, Canada”