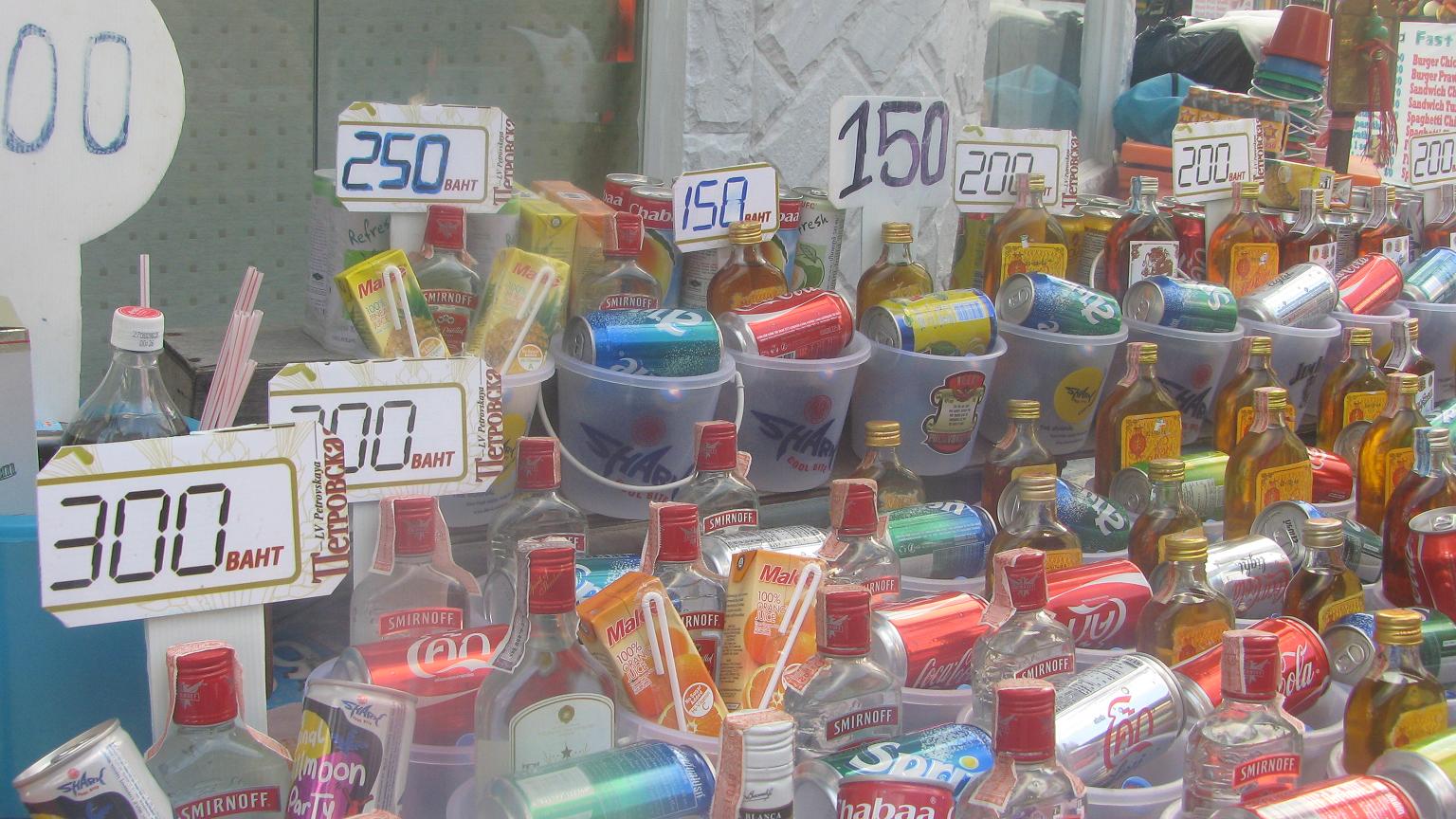 Hello fine citizens of the internet,

I had the pleasure of attending the Koh Phangan Full Moon Party in Thailand, November 2nd 2009.  All I can say is that I’ll never look at a full moon the same again.

It’s really tough to even begin thinking of how you can describe something that you positively must experience in order to even get a feeling of what it was like. Think “Sensory Overload”. If you’re someone who feels uncomfortable in crowds, or needs their “personal space” then forget about attending. This place was a jungle.

Debutants, derelicts, degenerates, damsels and distinguished gentlemen from across the globe gathered to celebrate the “Full Moon” in a most prolific party atomsphere. Every bar on the beach had it’s own dance arena and different style of music. When I say “different” I mean “same same but different”.

Locals sold buckets of alchohol that consisted of a mickey and mix, for ~150-300 baht, that’s ~$5-$10US a pop. They definitely knew how to fuel the fire, in a most egregious fashion. Some prudish, conservative members of society could consider these prices crimininally irresponsible.

I arrived at the party at ~4:30 PM, after taking a high speed catamaran for 350baht. Considering all of our belongings were still on Koh Tao, we hit the beach, early. Before that, myself and a Canadian friend got a room, ~30 meters from the party. I thought of it like an insurance policy, hopefully I won’t use it but in the event I need / want it, it’s there. The room only cost us 400 baht total with a 200 baht key deposit.

If you were to of booked online, they would of instilled fear that “getting a room is impossible” and that you need to book for 5 days in order to secure a “spot” online. It’s garbage, we showed up the day of, ~6 hours before the madness began and got a room, no problem. Not only that but the room, was right at the party which is good but bad. Good because it’s easy to get home, bad because once “home” you’re still at the party…

The room was nice, it had elevated beds and mirrors all over the place, definitely different and decrepit but still acceptable for the style of room I’ve become accustomed to. Only weird thing was at about 4am, I came in and there was the largest cockroach I have ever seen, I crushed him with my shoe, then found him hauling his half destroyed carcas to safety. At that point I ended it for him, I digress.

The party is free and you basically just cruise up and down the beach until you find a vibe you like, hit it up for a while then keep cruising. I spent about half the night with friends, the other half just cruising around solo, running into people, having a laugh and continuing on my way.

I will say, the place had an “awesome but dangerous” vibe to it. It was kinda like a giant coral made up of people, everything / everyone was moving, constantly. If you weren’t moving, you were like a rock and had no business there. As long as you were moving, you were okay. It’s a beautiful place, lots of great people and great fun, there was an edge though. You knew that there were sharks around and other predators so it was not a good place to “let your guard down”. If anything it was a place to go, have fun, but definitely keep your wits about you. Just like a coral, most creatures in it are having a great time but at any given point in time, something, somewhere is not having a good time. Know what I mean? Do I have to spell it out for you?

The room came in handy near the end of the night, after a few hours of sleeping while vibrating to the bass lines I woke up and went back to the party, at which point it was just the “left overs” to some extent. Probably people who wouldn’t mind sleeping but were too “hopped up” to do anything about it, but continue dancing. The peak hours of the party, without a doubt, were 10:30PM->3:30AM. Seeing a lot of blank stares and empty eyes early in the morning made me realize it’s time to get this trek going.

At this point I asked a cab driver what time the first ferry back to Koh Tao was, they said 8:30, I went around and asked another cab driver, same thing. At the time of me asking them, it was about 7:20AM.

I made the executive decision that getting outta here was a priority, I was done with the scene, in fact having been in Vancouver -> Vegas -> Bangkok -> islands and Full Moon, the whole “party scene” was becoming dreadfully boring. I went around to where my friends were and informed them of it, we got out of there and off to the ferry. We got ripped off at the ferry but I dont’ care. They charged us 450 baht for the speed boat.

You see the cab driver will take you to a place ~200M from the harbor and they charge you there, since time is of the essence, you typically just accept the deal. A friend who got there earlier went direct to the harbor and he paid 250baht. It’s all still nothing but it’s the principle and hey, 450 is getting close to double 250… As a result, I paid ~800 baht for round trip and got ripped, flip side is, others bought a “full round trip ticket” for 950 baht. You have to think like a business man / woman to not get ripped. If you lived there, and had all these people with fat wallets coming through, wouldn’t you overcharge as well? Supply and demand, if they’ll pay … Why not charge it?

All and all, I’d recommend you stay in your room after the party for a while. The sea is extremely rough after a full moon and the ferry was filled with people puking as I mentioned yesterday. Some friends took the later and smaller boat… They said people had lifejackets on and were saying prayers. Twas a crazy evening.

If you do get a room though, I mean it’s so cheap why not get a room near the party and another a good distance from the party. Crash near the party and in the morning go back to your main area and hang out for a while. At the travel clinic I was told that 40% of Canadians who die abroad while traveling, do so as a result of motor vehichle accidents, particularly in rural areas at night. If you’ve ever been to Koh Phangan, Thailand, you know the ride from the ferry to the beach party is absolutely mental and not somewhere you’d want to be at night, or on a scooter at any given time.

This is a view from the balcony near our room, this is half the party, past the tree to the right, it’s the “same same but different”, if you know what I mean.

P.S They canceled all the ferries from Koh Tao –> Anywhere today. It’s too rough. Last night they had a massive storm that woke me up several times. I will see if they have one going later today as it appears to be clearing up right now. That said, the ferry ride will not be fun but it’s the only way out.