Today we have another installment from the SHABL video vault and it’s about a dolphin safari and snorkeling adventure in the Gulfo Dulce, Costa Rica. The Gulfo Dulce is basically between Golfito and the Osa Peninsula in south-western Costa Rica. It’s also one of the most biological diverse places on the planet; Osa Peninsula that is. My friend Maria who operates the Osa Beach House won some tickets and well, I joined her and another friend. I was lazy and wasn’t in the mood but BOY AM I GLAD I went…

Oh yeah, it’s in 1080HD so if it’s showing fuzzy, tell your browse to correct itself before it…

We left from Puerto  Jimenez which is the “big city” on the Osa Peninsula. I love it there so much and just watching this video made me remember what a special place it is. The dolphin safari had everything I needed and more including a crying kid. Have you ever been to Costa Rica? I suggest you keep it in mind as it’s a fantastic place and I’m looking forward to returning soon(ish). 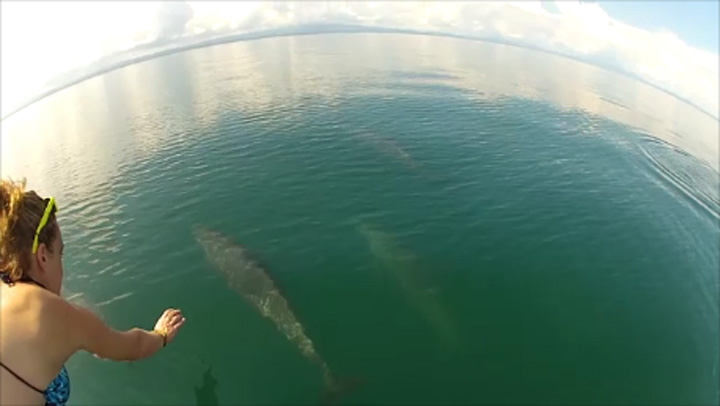 If you remember, I spent a good chunk of time in Puerto Jimenez and it’s precisely because I met Maria and crashed at her crib aka the Osa Beach House. It’s a comfortable three-story beach front vacation rental made of tropical hardwoods that she was getting ready for business. I mean this sincerely when I say it was one of the healthiest and most positive / productive periods of my entire life. I’m so glad we had a mutual friend (cue captain with broken hip who sails a ship) that said we have to stop in.

Something about the region is just special and if you ask anyone who has visited the Osa, they will probably tell you the same.

I’ve concluded that I quite like making videos and as much fun as typing is, it’s more fun to get in front of a camera than hide behind a keyboard. Also editing a video brings you back to the moment and gives you a better idea, yes?  If you like this video and want to see more, I’d appreciate if you subscribe to my Youtube Channel. I’ve got lots of adventures left to edit and even more to embark upon, your support is appreciated. Oh, as you can see it’s a work in progress much like most things.

Enough typing! Stay tuned for more videos and in September, I’m off for the winter again…

Have you ever done a dolphin safari or any  type of sea safari? How was it?

P.S: I almost lost the GoPro again and am lucky I found it on the ocean floor. If swimming, bring a lanyard!