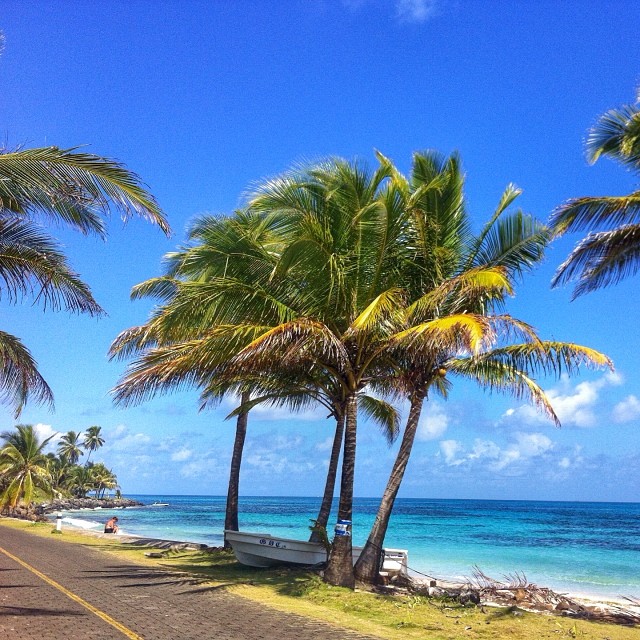 Something wonderful just happened on a mission to Big Corn Island, I got everything fixed up and a new perspective of sorts on what Little Corn is all about. The two islands are decidedly different despite being only 7 miles apart and besides that, completely isolated. The real beauty of Big Corn is that it´s only a short ferry ride away and you´ve got everything that Little Corn lacks…

Little Corn is a great spot to enjoy the sun but when it lacks lots in terms of creature comforts. The no power during the day is a real dividing line… I just spent two nights on Big Corn and it was so nice to wake up at dawn, then go back to bed as the fan kept you cool and wake up when one normally would. Also, to be able to get online and load a page or have a skype conversation with ease was priceless.

As you know my computer was shot but I found a technician named Eddy who was as good as anyone I could have expected to have helped me anywhere else. He went through everything, was incredibly thorough and charged extremely reasonable rates. Turns out my hard disk was defective and he tried to retrieve the information but one of the partitions was corrupted.

No worries here, this fine gent found an old laptop hard drive from a Sony Vaio and got me going again. I am missing lots of data but most of the crucial stuff is backed up online.  You realize had it not been for him, I´d not be writing this from my office on Little Corn.  Instead, I’d be in Managua on my way somewhere.

Big Corn also has a really nice cab system and it only costs $0.70 to go anywhere on the island. There are also buses which cost considerably less. The port area is the least desirable neighborhood on the island and it is called Brig Bay; I like the east side of Sally Peachy and the South End is great as well. In Sally Peachy, you’ll find dreamy beaches and have a great view of Little Corn in the distance.

The thing with Big Corn is that there is no real scene compared to Little Corn. 85%++ of tourists who fly in from Managua bypass Big Corn and go directly to Little Corn; it’s just different. Also, past 9pm at night on Big Corn, not much going on unless you venture into Brig Bay which isn’t on my to do list anytime soon.

There are some expats / tourists over there but it’s just a tiny sliver of the tourism pie which is being baked up and rising by the day here in the Corn Islands. I’ve decided that it makes sense to visit Big Corn Island more; preferably during the week and returning to Little Corn on the weekends to unwind.

The beauty of Big Corn Island is that it’s still a tropical paradise but it has all those amenities that the little island lacks. Also, it’s only a short ride away and the fact that everything is cheaper doesn’t hurt either. Keen to explore more of this island as time goes on but will also be glad to know that eventually, I’m leaving back to Little Corn…

P.S: There was no power last night and doubtful there will be tonight; ahh Little Corn Island…

6 thoughts on “Discovering the Beauty of Big Corn Island”