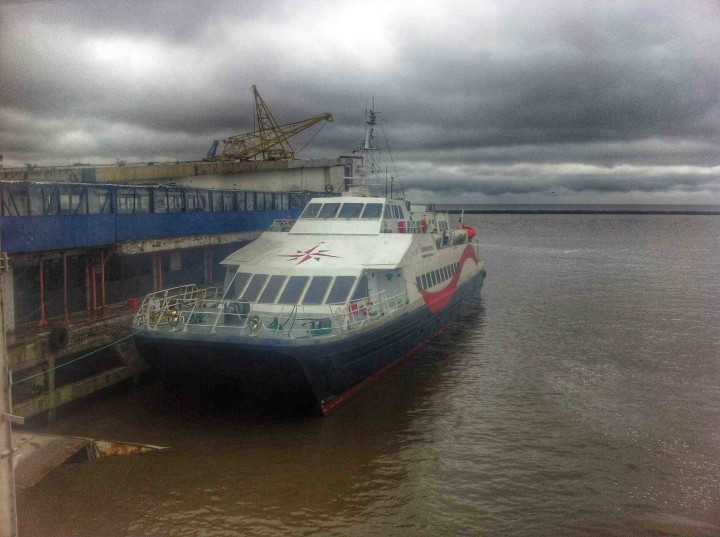 I’m writing this from Montevideo, Uruguay and I want to tell you about the trip I took on the Colonia Express from Buenos Aires, Argentina to Montevideo, Uruguay. The trip wasn’t so long but let me tell you, it was ROUGH. It reminded me of the most rugged ferry I’ve ever taken which was from Koh Phangan to Koh Tao, Thailand after a fool moon party. It was basically a vomit festival and everywhere I looked, I saw people filling small white plastic bags with orange fluids…

The trip isn’t long  and about 1.25 hours max but it gets rough out there. About 30 minutes in and you’re skipping and hopping about, I got up to go to the back of the boat, lost my footing and nearly smashed my teeth on some chairs. It was bedlam and this guy who looked like Dave Grohl only the South American edition walked around giving everyone bags and carrying this massive bucket to collect the bags shortly after filled with vomit.

That look in people’s eyes as they are spewing everything they have is pretty miserable. I felt close numerous times but remembered in Thailand they were giving out tiger balm to help sooth the sea sickness. I applied much and it seemed to have worked. A few times I thought I was going to hurl but sea sickness is to some degree a mental game you have to play. You feel yourself going but you have to stop the ride and “get serious”; I learned that fishing off Little Corn Island.

I think you always feel even worse after you’ve really had a go at it so if you can avoid it, do so at all costs. I took the 8:30am boat with my new friend from Czech Republic and glad I did as later people would have had more in their stomachs… He took motion sickness pills and still thought he was going to lose his lunch, good times? Many people visit Colonia for a day or a few hours on the way to Montevideo, I just booked it through as it was a grey old day as they say. Imagine dying on the ferry realizing you gotta go back in a few hours…

I arrived in Montevideo and nobody answered the door where I was staying, odd?

Sure enough this nice couple who lived underneath helped me out. They didn’t speak English and my Spanish needs work but guess what? We both spoke French and it lead to a few hours of hanging out, watching action movies, drinking coffee and cola, eating sandwiches and a few laughs. I was going to stay with them but everything ended up working out. Straight up, it’s the kindness of random strangers on the road that is part of why I’m so hooked on this lifestyle. It’s the people who leave the biggest impression from a place.

Oh yeah, supposedly today was “normal and low tide”. On a stormy day at high tide things get rugged. If you get motion sickness easily you can always take a bus OR you can take another ferry line. This one was the cheapest and it was a rather small catamaran. I saw another pulling in shortly after from Buquebus and it was massive aka dwarfed the one I arrived on and in the ocean, the bigger the boat the less intense the weather feels…Take a look at the crossing on the map, it’s got some serious exposure to the Atlantic which kinda explains the turbulence.

Today was a slice and I think I’ll be here a few days, maybe a week? Who knows?!

P.S: Muchos gracias to my new friends in Montevideo.