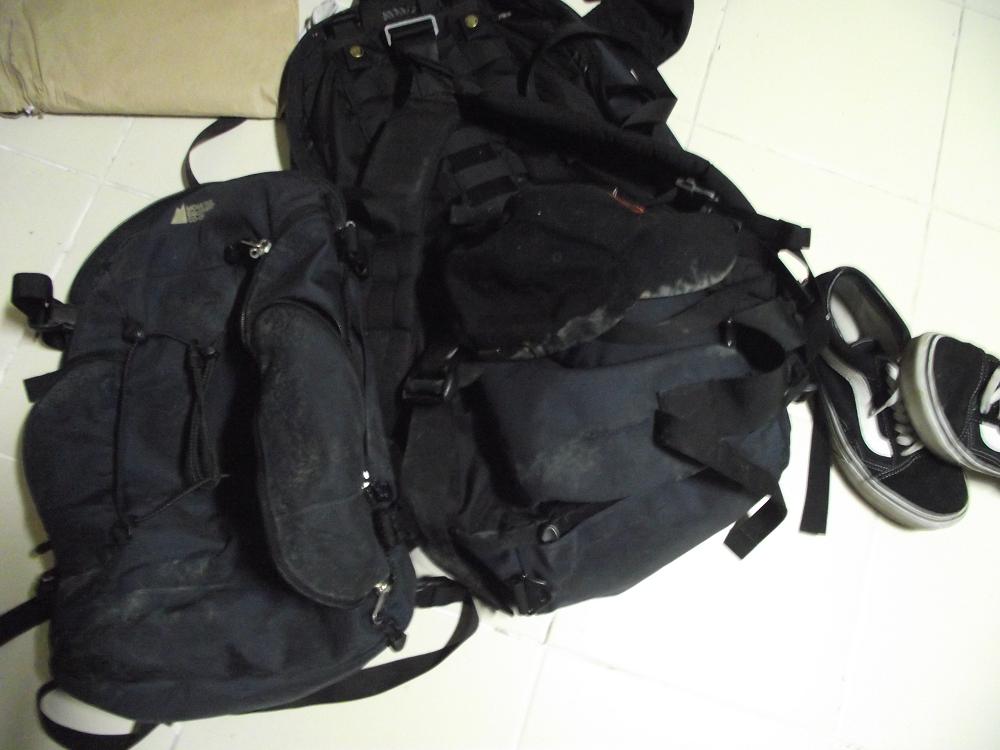 This is one of those updates I wish I never had to write, “how to clean a moldy backpack“. On the topic of mold on backpacks, some background, yes? I was cleaning my room about 2 weeks ago, ever so thoroughly, I dare say. Suddenly I decided to stay another month, for some reason that is beyond me. While going for that last small piece of garbage that is totally and completely insignificant in the overall room, I tilted a half full water bottle and spilled half of it on the ground. Since we’re basically in the tropics I figured it would evaporate. I didn’t factor in the proximity my backpack and all known possessions were.

Fast forward 2 weeks, I have this weird cough that could best be described as “trench throat” and just feel like crap in general. Kinda like a guy who hates his job, his wife and his life who also suffers from malnutrition and is direly diabetic. I notice some “mold spores” on the handle of my coveted backpack  and think this can’t be. A few hours later for some reason or another I flip the backpacks and they are just covered with a velvet moldy blanket on top. #FML.

The remedy is a 2 part process done twice, so basically 4 steps. The first part is mixing significant quantities of bleach with some boiling water and scrubbing the mold off. Part 2 is letting it dry. Part 3 & 4 are basically just a repeat of the initial process. Just finished the bleaching and they are drying on my patio. The worst part of this whole debacle is an incredibly ugly Jagr hat that has now been ruined… Like a spilled drink, it will never know what could have been…

Suffice to say bleach is cheaper than dirt over here, who would have known? If you are living in an apartment or guest house, just go buy one of those soups for 15baht and dump the contents in the garbage. Keep a straight face when the clerk lady looks at you like you’re clinically insane and then fill the empty container with boiling water. That was the only way one could figure to get boiling water. Then use a sock that should have been burned months ago and you have a makeshift “purification station”. Why is it that the sock stealing gremlin who haunts you never steals the old crusty sock that should get lost?

Truth be told, I would have happily brought this to the “laundry dude” but he and I are not on good terms. By not on good terms I mean I left smiling saying “no problem” when in reality I can’t believe he lost my custom made khaki cargo shorts from Vietnam. They received a significant spill of spicy curry and needed to be cleansed. I dropped them off came back 2 days later and he had no idea where they were. To make matters worse I speak no Thai and he speaks no English…

Hopefully this won’t happen to you, it’s really quite disgusting.

P.S: This place is a true love hate. Fun for a family and cool for a couple… Kinda boring for a bachelor who isn’t involved in some sort of formal occupation. I live in what feels like a retirement home, it’s good to get work done but after a while motivation can only go so far without renewed inspiration. Yeah, something like that. Either way, moving in next 2 weeks or retiring here and never using the internet again.

4 thoughts on “Joys of Cleaning a Moldy Backpack”